Psychology graduate student Emily Berry '24 has an irrepressible spirit, a case of wanderlust, and a strong desire to help others

Emily Berry ’24 MSCP was awarded one of the 2,000 Fulbright grants given to U.S. scholars every year. About three weeks ago, she headed to Mexico to work as an English teaching assistant, while also enhancing her professional skills for her future career as psychologist. Berry is currently pursuing an ¡Enlaces! [Links] certificate alongside her marriage and family therapy master’s in counseling psychology, which provide students who have a Spanish language proficiency to practice using professional psychological terminology and learn about the diverse cultural factors involved in counseling Spanish-speaking clients.

Unlike many of her classmates who may speak Spanish at home, Berry is the only one in her family who speaks Spanish, having first pursued it throughout high school. When she began her undergraduate studies at McKendree University in Lebanon, Illinois, Berry knew that she wanted to help people in her career but had no clear vision as to what that looked like. That changed when she went abroad for the first time with a friend on a volunteer mission to Guatemala. “I was able to talk to the people there, and I loved that,” she said.

She thought she’d minor in Spanish to maintain her proficiency, but a cross-cultural psychology class established the trajectory for her psychology/Spanish double major and her life’s pursuits. The travel bug in her was deepened when she received a scholarship to go to Japan for a two-week cultural exchange, where she met people from all around the world. She also completed a semester study abroad program in Spain.

A Spanish-language professor at McKendree planted the Fulbright bug in Berry’s ear and catapulted her into a cycle of travel-based, cultural experiences supported by scholarships and work assignments. Following graduation in December 2019, she participated in City Year Miami, an AmeriCorps program, while applying for the Peace Corps and a Fulbright. “I was offered a position with the Peace Corps,” she says, “but I declined it because I hadn’t heard from Fulbright yet. I didn’t get the Fulbright, but neither program proceeded because of COVID.” Berry spent the summer of 2020 working at a school in South Florida before moving to San Francisco with AmeriCorps to work with elementary school students for a year.

Berry thrived in San Francisco, living in a co-op space with 70 housemates. “The atmosphere was like college — without the homework and tests,” she says. “It was great because I got to meet people from all over the world. Everyone was more grown up than college students — more respectful and open minded. And I really enjoyed the work with my students. Many of them were monolingual at the beginning, and it was really satisfying to watch them grow and become bilingual.”

In August 2021, Berry headed for the Mount, and undeterred by her previous failure, she applied for the Fulbright again, this time successfully. “I like competition,” she explains. “If my professor believed I was a great candidate for a Fulbright, why not keep trying? Persistence is good.

“The Fulbright is a huge network, and I love making connections with people and being able to relate to others. I thought it would be a fantastic opportunity and help me with my career endeavors. The majority of Spanish-speaking communities in the U.S. are from Mexico and for me, wanting to be a therapist and, in the future, a psychologist, it’s important that I understand the culture. Only 5% of psychologists in the U.S. speak Spanish, so going to Mexico is a wonderful opportunity for me to better my language skills.”

Berry’s desire to help others stems from having had a brain tumor as a young child.  While the tumor was ultimately surgically removed, the treatments affected her heart and left her slightly disabled. “But I don’t let that stop me from doing things,” she says. Even at that young age, she was the one consoling her parents. “I told them that I was going to be fine. I have a very optimistic mindset in the sense that whatever happens, happens. It was a challenge to overcome, and that’s the way life is.” 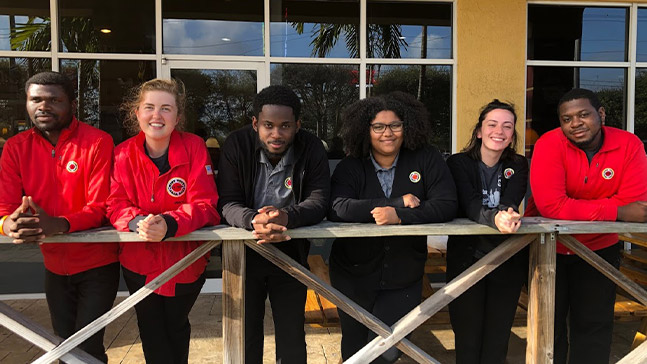 Berry remembers all the love and support that she received. “An illness like that really emphasizes the importance of connection, of family and friends and community. I had that positive environment and all these different people in my life helping me.”

Now that she is studying psychology, Berry feels that her family could have benefited from formal therapy during her illness. “I think that my family was really busy worrying about me,” she explains, “and in turn, their emotions caught up with them. When everything settles and you look around, it’s very interesting to see how events manifest into certain behaviors.

“I’ve psychoanalyzed my family a million times,” she laughs.

Her career plans include myriad goals that she would like to accomplish in the future, such as writing a book, obtaining a PsyD, working at a hospital and helping kids who have experienced some type of trauma, and, of course, more travel and cultural experiences. “Variety is the spice of life,” says Berry. “I can’t remember the last time I was bored. When I want something, I’ll put my entire being into making it happen.”

Berry loves the small classes and personalized attention from the ¡Enlances! program. “My professors have been so kind and helpful; their encouragement and communication have helped me grow tremendously,” says Berry. “Nancy Ballesteros [department chair and assistant professor of language and culture] helped me practice for the Fulbright interview and she evaluated my Spanish, so that was super helpful, too!”

She is also very grateful for the connections she has built with her cohort. “A lot of my classmates are Latinx so they have been a big inspiration — their Spanish is on a different level! I strive to be as fluent someday.”

Berry’s mantra is “open your mind and dream big.” Another core value is a Zulu word she picked up during City Year Miami: ubuntu, which means ‘I am a person through other people.' “In other words,” says Berry, “my humanity is tied to yours. I absolutely love that because it’s so true. We’re all connected.”